A reality for most parents is the need for child care—whether it is care for an infant, pre-schooler, or an older child. In Canada, both the federal and provincial governments are responsible for establishing programs to create and sustain quality child care. Therefore, every province tackles this matter in a different way. This blog post will dive into the current status of child care in Alberta by summarising recent regulations the UCP government has introduced and reviewing recent funding efforts of the provincial government.

The Government of Alberta has made controversial decisions regarding child care regulations on several occasions in recent years. In early 2020, the government announced the termination of the Accreditation Funding Program effective April 1, 2020. This program ensured quality standards that child care providers had to pursue and provided wage top-ups for centres that met those standards. It was removed in favour of the provincial Child Care Licensing Act since, according to the Minister of Children’s Services Rebecca Schulz, “[the accreditation program] was a duplicate program over and above basic licensing.” Minister Schulz supported the removal of accreditation stating that “childcare workers can focus their time supporting kids and families, as opposed to filling out government paperwork.” However, with the removal of the accreditation program, Alberta was left with only provincial licensing (under the Child Care Licensing Act) which simply lays out minimum standards and not standards for higher quality child care and education.

More recently, in February, 2021, the new Early Learning and Child Care Act and Regulation came into effect. The new regulations have led to many changes. Some were minor, such as changing the name of the Act and clarifying certain terms. Other changes were much larger, such as strengthening licensed home-based child care options by allowing home-based child care providers to care for up to 6 children (not including their own) and expanding the use of outdoor spaces by allowing applications for exemptions to fencing requirements. Many of these changes are likely to have positive effects—especially to streamline some aspects of the licensing process and allowing greater flexibility for the types of care that can be provided. However, critics worry that some of the changes run the risk of creating loopholes that allow facilities to hide conflicts or disputes from the public through private appeals.

Alberta has also encountered some challenges with funding for early learning and child care (ELCC) centres. In 2017, the NDP provincial government pushed forward a pilot plan that comprised 22 child care centres offering $25-a-day child care to help many Albertan families economically. The subsidy essentially ensured that parents would not spend more than $25 per day for child care at these facilities. After its first year in operation, the government published the Evaluation of Early Learning and Child Care Centres to assess the effectiveness of the program, inform potential investment, and highlight the social impact and sustainability of ELCC centres. One of the recommendations from this report was that Children’s Services should “continue to support ELCC centres to implement the ELCC curriculum” due to the enormous positive impact the program had. In 2018 the program was expanded by the federal government, which added 100 more federally funded ELCC centres throughout the province. However, after an initial extension, the provincially funded program was discontinued by the (recently elected) UCP government on July 31, 2020, leaving many families scrambling for affordable child care in the midst of a global pandemic. The federally funded program for ELCC centres—arranged by the previous NDP government—came to an end on March 31, 2021, as the UCP worked out a new deal for child care subsidies.

A renewal of the Canada–Alberta Early Learning and Child Care Agreement was signed in July 2021. The agreement provides “over $290 million in [federal] funding over 4 years” and is considered by the UCP as an integral step in “provincial and federal governments coming together to negotiate a longer-term strategy”. However, as of August 2021, the governments have not signed a deal for a new federal program, which aims to reduce the cost of child care by half before next year and further reduce child care fees to an average of $10-a-day by 2026. The NDP Opposition argued that for every day this agreement is delayed, Albertans lose about $800 a month in savings per child.

The UCP claims that they are victims of “dishonest, bad-faith negotiating” after the federal government approved a subsidy agreement with Quebec but rejected an Albertan proposal that had similar arrangements. Ottawa argues that Alberta is not willing to meet federal funding standards for ELCC centres, specifically regarding the requirement to support non-profit facilities. To compare: Quebec currently runs a program that provides affordable child care outside of the federal arrangement with fixed fees at $8.25/day, whereas Alberta has a large disparity between facilities, with for-profit centre fees exceeding not-for-profit fees by up to 85%. The federal government is requesting increased support of not-for-profit facilities, among other conditions, and has yet to come to an arrangement with the Alberta government. Regardless, now that the election writs have dropped, Albertans must wait until late September for any conclusion on the matter. 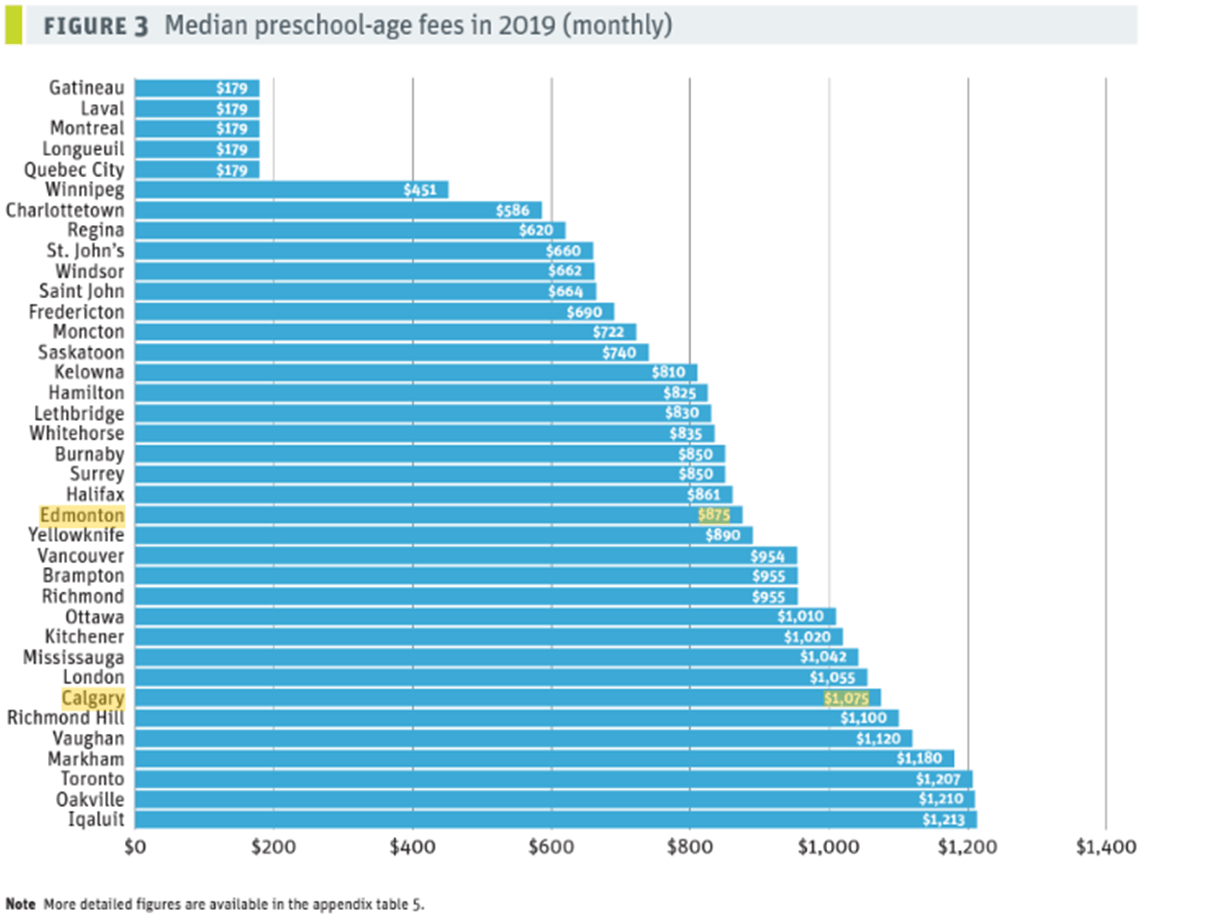 For more information on this topic:

Thank you to members of the Edmonton Council for Early Learning & Care for their contributions to the development of this post. Stay tuned for the next post in this series, focusing on child care in a municipal context.

Luis Murcia’s goal and passion is the pursuit of knowledge for the betterment of society. In 2013, he came to the University of Alberta from El Salvador and graduated with a BA in psychology and a minor in philosophy. He is striving to develop into a person that can help others become their best self.