A Profile of Poverty in Edmonton – May 2019 Update 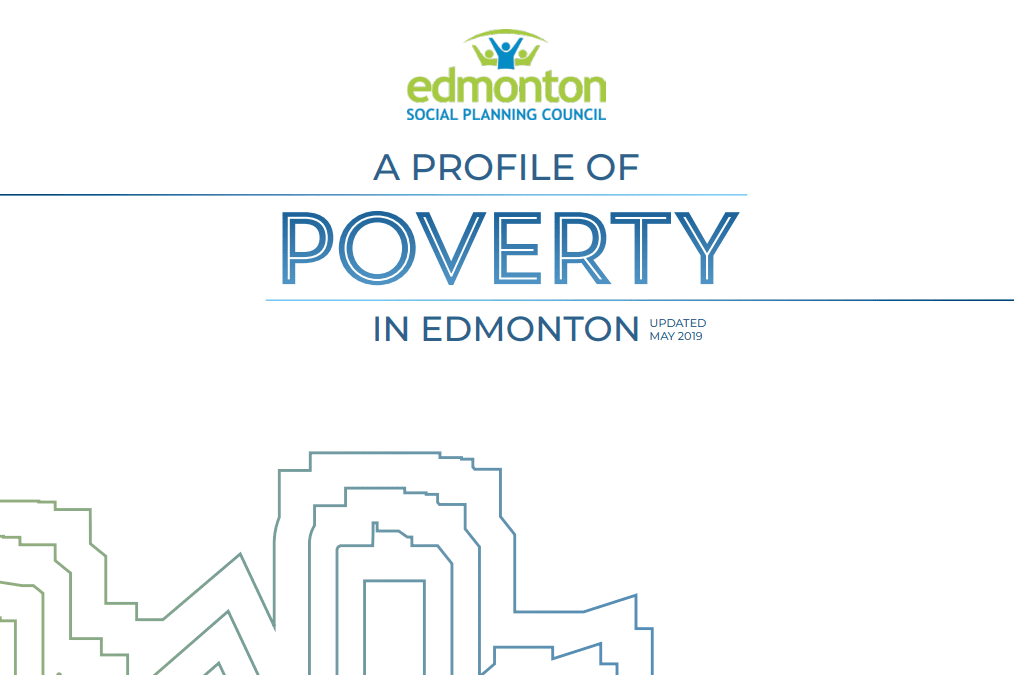 Read the full report (click on the link):A Profile of Poverty in Edmonton – May 2019 Update

Poverty affects people from all walks of life – young, old, employed, unemployed, those who are new to Canada and those whose ancestors have lived here for hundreds of years. The structure of the economy traps people in bad situations and forces some into poverty by constraining choices and limiting options (Ghatak, 2015). Limited social housing, eroding benefits, and lack of access to stable, good-paying jobs, has created an economy that takes away many people’s choices and leads to poverty. People are increasingly forced into unstable jobs that don’t pay enough to satisfy needs, and some can’t find jobs at all. The cost of living has also gone up, which forces many people to focus on making ends meet and living day-to-day, rather than planning for the future or their children’s future. Because people in poverty lack the means to participate in their communities, they are often socially isolated (Mood & Jonsson, 2016; Stewart et al., 2009). The stress experienced from poverty can lead to negative impacts on mental and emotional health, the ability to make decisions, and even family and neighbourhood cohesion (Carvalho, Meier, & Wang, 2016).

Edmontonians believe in helping and protecting one another, so we must work together to address poverty. For this reason, the Edmonton Social Planning Council has produced this Profile on Poverty – 2019 Update in partnership with EndPovertyEdmonton. EndPovertyEdmonton is a community initiative working towards prosperity for all through advancing reconciliation, the elimination of racism, livable incomes, affordable housing, accessible and affordable transit, affordable and quality child care, and access to mental health services and addiction supports (EndPovertyEdmonton, 2019). It uses a collaborative model, whereby governments, businesses, non-profits, and many other forms of organizations can come together to end poverty in Edmonton in a generation (30 years).

We need to break the constraints of our current economy. Every Edmontonian deserves to have the freedom to pursue opportunities.

It is our responsibility to ensure all people in our city have a decent standard of living.

Before solutions to poverty can be considered, the prevalence of low income must be understood. One of the challenges of measuring poverty and low income is the variety of ways Statistics Canada collects data (Table 1). Their primary data source is the federal Census, which is conducted every five years through a national, mandatory, survey. The last Census was conducted in 2016 and uses income data from 2015. Due to its scope, it contains the greatest level of detail.

In contrast, the T1 Family File (T1FF) is collected every year from tax-filers. Some information available in the Census is not collected through tax-filer data, although the T1FF includes First Nations reserves and collective dwellings (Pinard & Pagé, 2018). As a result, low income estimates tend to be higher when using the T1FF as compared to the Census.

Another source of data is the Canadian Income Survey (CIS), a yearly cross-sectional survey that provides a portrait of income and income sources for Canadians.

Due to differences between data sets, the data source for particular measures in this report have been chosen based on the aspect of poverty being explored. All data is taken at the Edmonton Census Metropolitan Area (CMA) level, unless otherwise indicated. The Edmonton CMA includes the City of Edmonton, the City of St. Albert, Parkland County, Strathcona County, Sturgeon County, Leduc County, and all incorporated urban centres and First Nations located within the boundaries of those counties.

Read the full report (click on the link): A Profile of Poverty in Edmonton – May 2019 Update

About Us
Our History
Major Funders
Board of Directors

News and Announcements
ESPC in the News
Media Releases

Our social well-being indicators are based on social determinants of health. These indicators are the economic and social conditions that shape the health of individuals and communities.