Blog: Anti-Asian Hate: One Year After the Pandemic

In July 2021, The Learning Network, a Canadian group that develops resources for ending gender-based violence, published an article called Examining the Intersections of Anti-Asian Racism and Gender-Based Violence in Canada. At the article’s outset is a startling statistic: “More than 1000 cases of anti-Asian racism have been reported by community organizations in Canada, in which Asian women made up close to 60% of reported victims. Canada is now reported to have more anti-Asian racism reports per capita than the United States” (p. 1). The rise of racism and xenophobia — specifically against people of Asian descent — has been on the rise in North America since the start of the COVID-19 pandemic in March 2020.

These hate-fueled incidents have prompted the formation of activist groups in Canada and the United States, such as Stop Asian American/Pacific Islander (AAPI) Hate. The coalition formed on March 19, 2020 in order to track and respond “to incidents of hate, violence, harassment, discrimination, shunning, and child bullying against Asian Americans and Pacific Islanders in the United States.” Stop AAPI Hate was influenced by the anti-Asian-violence rallies held in protest of the increasing anti-Asian hate crimes in the United States, as well as the Atlanta spa shootings, which tragically claimed the lives of six Asian American women.

Earlier this year, Stop AAPI Hate published a national report detailing the racially-motivated hate crimes that were reported to their organization from March 2020 to February 2021. Notable findings included women reporting hate incidents 2.3 times as often as men and people of Chinese descent reporting the most hate incidents.

The Stop AAPI Hate report showed 42.2% of a total 3,795 reports were submitted by ethnically Chinese people. 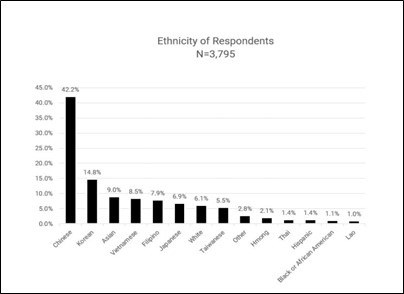 Reports of similar race-based violence have appeared in Canada. On June 7, 2021, a Muslim family of four was killed in a racially-motivated attack in London, Ontario. Less than a month later, on July 15, 2021, a mosque in Cambridge, Ontario was vandalized in another deliberate act of hate. These incidents are not isolated — Asian Canadians are experiencing hate everywhere. Between 2020–2021, Vancouver alone reported a 17% increase in anti-Asian hate crimes.

The numbers illustrate a frightening reality. For newcomers who have just arrived in the country, it means feeling unwelcome and unsafe in a place that promotes multiculturalism and diversity. For Asian Canadians whose families have been in Canada for years, it means cultural isolation and marginalization from the place that they consider home. For others, it means a chasm of distrust and misunderstanding between neighbours, exacerbated by the pandemic and an increasingly dangerous “us vs. them” rhetoric. The issue affects all Canadians on a societal and cultural level.

Solutions for ending racism in Canada have not been developed as quickly or efficiently as the COVID-19 vaccine. The Learning Network offers suggestions for individuals, communities, and governments to end racialized and gender-based violence against Asians in Canada. Some of their ideas include:

While these suggestions are a good start, it will take much more to undo the harmful impact that racism and violence has had on Asian Canadians, especially throughout the pandemic.

Racism is not a radical concept. Anti-Asian racism is not new in Canada. In fact, Chinese immigrants were banned from coming to Canada until 1947 — many people probably have living relatives who remember this time of government-promoted xenophobia. Race-based violence is deeply embedded into societal practices and institutional policies. Issues are only rising to the surface because of the boiling point catalyzed by COVID-19. Canadians must reconsider the racial attitudes and biases that they carried into the pandemic and treat them as seriously and effectively as they did their COVID symptoms.