In the simplest sense, multiculturalism is the acknowledgment of multiple cultural identities. In Canada, this means “ensuring that all citizens keep their identities, take pride in their ancestry, and have a sense of belonging” [2]. Multiculturalism is considered an important foundation of Canadian society, having been enshrined by law in the Canadian Multiculturalism Act in 1985. The Act “recognize[s] and promote[s] the understanding that multiculturalism reflects the cultural and racial diversity of Canadian society and acknowledges the freedom of all members of Canadian society to preserve, enhance and share their cultural heritage” [3]. The policy also encourages, fosters, and promotes the advancement of multiculturalism, calling for equitable participation and treatment of all individuals in Canadian society, regardless of cultural, ethnic, or racial origin. How citizens go about finding their sense of belonging is not explicitly prescribed by doctrine and, while Canadian Multiculturalism Day provides an opportunity for Canadians to openly promote and celebrate their cultural heritages, there is no account for how Canadians should address these key features of their identities the other 364 days of the year.

Canada’s multiculturalism policy has always stood in stark contrast to the United States’ “melting pot”, which encourages the assimilation of newcomers to one common culture. In recent years, American scholars have denounced the melting pot theory in favour of the “salad bowl”, “where cultures of different shapes and sizes can coexist” [4]. One main difference between Canada’s multiculturalism and America’s salad bowl is that ours is an ideology that has been acknowledged by the government and protected by law. However, whether law is enough to prompt action from the citizenry to make multiculturalism a reality and promote national unity, is still up for debate.

Regardless of the ongoing debate, both multiculturalism and the melting pot/salad bowl are still just ideas – ideas that stay in text unless they are manifested into reality by actions. While the Canadian Multiculturalism Act does call upon federal institutions to “generally, carry on their activities in a manner that is sensitive and responsive to the multicultural reality of Canada” [3], this includes the ongoing colonization and inhabitation of Indigenous lands and reluctant support for the accommodation of religious diversity [7].

Hate incidents in Canada reported by South Asian and Southeast Asian people increased by 318% and 121%, respectively, during 2021 [8].  In 2019, 46% of Black Canadians aged 15+ reported experienced at least one form of discrimination in the past five years [9]. Regardless of the federal government’s mandates, it is up to the citizenry to ensure that Canada’s multiculturalism actually lives up to its name. 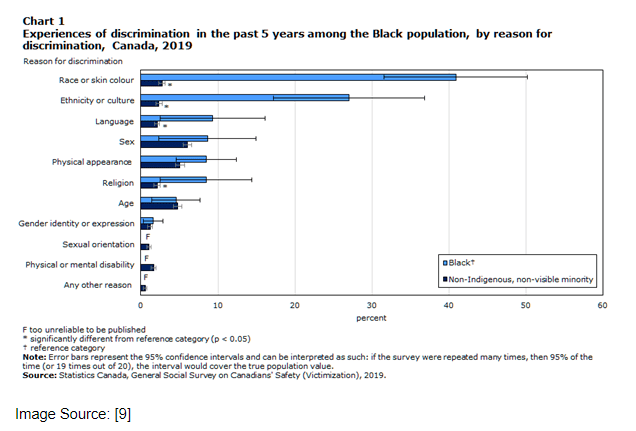 This Canadian Multiculturalism Day, I invite you to join the celebrations that are happening around the province. Actively celebrating each other’s cultures and embracing our differences is what enables Canada’s national mosaic. But, remember that multiculturalism includes the good, the bad, and the ugly – the ridges and fractures that appear when multiple cultures come into contact and confront each other for the first time. While the Canadian Multiculturalism Act ensures that there is infrastructure in place to support culturally diverse endeavours, it is the individual actions made by Canadians that ensure multiculturalism’s effectiveness.

[2] Multiculturalism. (2022, May 30). Government of Canada. Retrieved June 19, 2022, from https://www.canada.ca/en/services/culture/canadian-identity-society/multiculturalism.html

[4] Vidal, Jennifer. (2018, December 16). America the Salad Bowl – but some vegetables are more equal than others. Medium. https://medium.com/immigration-nation/america-the-salad-bowl-4883f9a77ad2

[8] Balintec, Jessica. (2022, April 3). 2 years into the pandemic, anti-Asian hate is still on the rise in Canada, report show. CBC. https://www.cbc.ca/news/canada/toronto/2-years-into-the-pandemic-anti-asian-hate-is-still-on-the-rise-in-canada-report-shows-1.6404034